You’re scoping out a local farmers market. Vendors surround you peddling everything from fresh produce to handmade soaps when suddenly you spot a booth with a patriotic red-white-and-blue sign for “Victory Hemp Foods.”

“Hey, you walking by, would you like to try hemp hearts?”

“What did you just say?”

“Tilt your head back and pop it in your mouth.”

The man behind the booth, Chad Rosen, wasn’t hired to pass out hemp heart samples. Nope, this Southern California-raised, businessman traded in a career running a recyclable glass service manufacturer company for an apartment in New Castle, Kentucky.

“I wasn’t feeling it working for a big corporation and needed to change direction,” says Rosen, who also had prior construction work experience.

His real interest was food, but not just any food, sustainable food. “The genesis is that I always worked in sustainable businesses that had an impact on the environment,” says Rosen.

After researching sustainable food sources Rosen decided to invest in hemp. That decision led him, and others, to Kentucky. 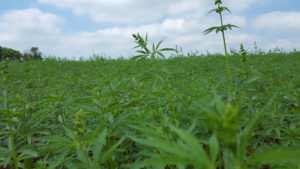 Hemp’s Day in The Sun

It’s easy to confuse hemp for its more popular cousin, marijuana. The main difference between the two is that hemp has only a trace amount — less than 0.3 percent — of the psychoactive chemical tetrahydrocannabinol (THC), meaning that no one can get high smoking or eating it.

“Whenever I offer samples people ask ‘Am I going to get high?’ and I say, ‘If you were I’d charge you a lot more,’” Rosen jokes.

Despite, the variations between hemp and marijuana, the federal government classified hemp as a drug since the Controlled Substance Act of 1970. Hemp advocates want the plant to be removed from that list so that all U.S. farmers can grow it, but Congress hasn’t taken action.

However, the 2014 Farm Bill allowed farmers in Kentucky, Tennessee, Colorado, Oregon and Vermont, to get licenses from their Departments of Agriculture to grow hemp. To do so, they established research programs that fall within the framework of the 2014 federal Farm Bill. Kentucky, initially had 134 hemp farmers registered for a hemp growing permit.

By January 2017, the Kentucky Department of Agriculture approved 209 applications for growers to cultivate up to 12,800 acres of industrial hemp for research purposes. (To date, 28 states have passed legislation allowing research hemp farming.)

At the time of the 2014 Farm Bill, Colorado, Vermont and Kentucky all had legislation for growing industrial hemp. Rosen had decided to invest in hemp, but he wasn’t married to investing in one geographical location. Once he learned about Kentucky’s tobacco culture, and how Kentucky was once a leader in hemp production, he realized hemp could have a huge impact for the state.

Hemp’s origin in the region goes back to the early 19th century when it was significant cash crop. Farmington, a historic plantation in the Highlands, was even the center of a thriving 550-acre hemp plantation. In the 1940s the U.S. government planted it to aid the World War II effort. In fact, hemp’s strong fiber material was used to make parachute cords for the war.

“Hemp helped us be victorious in WWII,” says Rosen, who ultimately, found a welcoming community in Henry County and a name for his new company: Victory Hemp Foods.

The ability to keep farmers farming, to find them a living wage and to give them diversity in the economy drives Rosen. “Tobacco kept farmers on their land, but as they continued to lose those contracts, they had the option to plant corn or soy or sell-out to someone who wants to do that. We don’t want to see farmers grow commodity crops,” he continues.

Rosen sees hemp as the solution. His first growing season begin with six farmers from Henry, Shelby and Oldham Counties. The hemp season runs from May/June when seed are planted until September when the grain is harvested. Rosen buys the grain from the farmers and de-hulls the germ or heart (the white bit inside the shell). He turns the hemp hearts into an assortment of products. 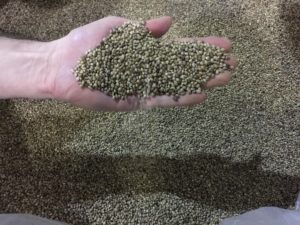 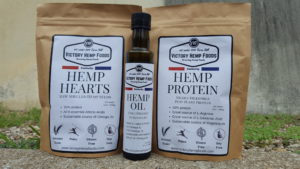 Getting Others to Buy in

“Hemp hearts are a really oily seed with a mild walnut or sunflower flavor,” Rosen says. “Hemp is protein-packed. It has all nine amino acids, Omega-6, Omega-3 fatty acids, and is non-GMO organic.”

Rosen recommends using hemp oil in dressings and marinades, liquefying seeds in smoothies for extra protein, blending it into pesto or toasting hemp hearts in place of nuts or seeds and sprinkling on salads. Hemp seeds also work well in yogurt or added to breads, baked desserts, hot cereals or granola bars.

In addition to retailers, Rosen’s found local restaurants enjoy using the product. Both Rye and Harvest in NuLu and Hammerheads in Germantown have sourced Victory Hemp Foods in their dishes. Migo in the Highlands even hosted a 5-course hemp-infused dinner.

Rosen sees this only as the beginning. “We’re creating a brand and creating a supply chain,” he says.

Although he does admit he faces, “healthy skepticism,” when explaining his project. But for every skeptic there is a supporter. Rosen was one of 44 domestic entrepreneurs selected by The White House to attend the 2016 Global Entrepreneurship Summit at Stanford University. There Rosen joined 700 other entrepreneurs from 170 countries in Palo Alto for a week of mentoring, and networking with business leaders, government officials and other entrepreneurs.

The 2016 Global Entrepreneurship Summit reiterated the importance to create diversity in the agricultural community. “Agricultural hemp is important for farmers in Kentucky, as well as in developing nations, since it can help feed the world’s growing population,” says Rosen.

Rosen also networked with others in the hemp industry when he participated in Village Capital AgTech Accelerator in Louisville in 2016. Village Capital operates business development programs for early-stage entrepreneurs in agriculture, education, energy, financial inclusion, and health. 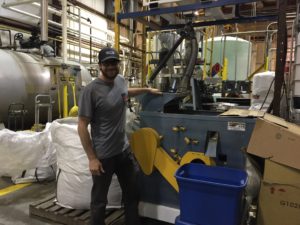 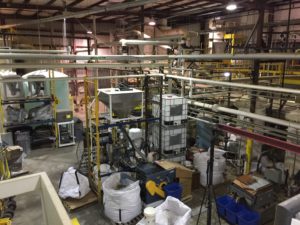 A Friend in Sunstrand

There he met mechanical engineer Dr. Trey Riddle, CEO, Sunstrand, which is the only commercial hemp decortication facility in the U.S.

“The start-up scene is a fairly tight knit community. People who are really interested in hemp, tend to run into each other into events,” says Riddle.

Born and raised in St. Matthews, Riddle was living in Montana running an engineering services company where he developed technology for new materials, hemp being one of them.

“I was originally looking for an alternative to glass fiber,” says Riddle. “Hemp has a good combination of cost and performance, good mechanical properties, good yield, and it’s a scalable technology. Hemp is a better alternative to flax and bamboo.”

Riddle also returned to Louisville in 2014, and opened Sunstrand here. Sunstrand makes fiber and other products out of natural materials such as hemp, bamboo and the hemp-like plant kenaf. The fibers are used in injection molding (such as an insulated coffee mug), building material (such as countertops), automotive or appliance insulation, pet bedding and so on.

“Kentucky was a natural fit and there were economic incentives to move my company here,” Riddle says.

Riddle’s company, like Rosen, buys hemp from a handful of Kentucky farmers and can process up to 7 million pounds of hemp per year.

“People are pretty excited about our company although it takes a minute for people to understand what we’re doing,” Riddle says. “We can incorporate a new agriculture crop that has high value to farmlands and offsets depleting farms.”

In November 2017, Sunstrand and Victory Hemp Foods took over the former SunOpta ingredients plant (1401 Locust Hill) in Irish Hill. The 25,000-square-foot facility allows both companies to leverage additional infrastructure. Rosen houses a de-huller, seed cleaner (which cleans roughly 1,000-2,000 pounds of seeds a day), hopper and gravity tables in the facility. He now has four employees. Sunstrand houses its staff, office, production line, research and development space, and manufacturing space at the facility.

“The best aspects of hemp are that it can do so many different things,” Rosen says. “It’s a versatile crop that can be used for its fiber, seed, oil-not many crops have that same potential.”

Best of all, it provides farmers with multiple streams of income all from the same plant.

Is hemp poised to become Kentucky’s next big specialty crop? Riddle thinks so but cautions that it will be awhile before it is commodity scale.

“We need more specialty crops for Kentucky farmers to take advantage of. Kentucky is leading the way. No doubt about it,” says Riddle.

“Kentucky leaned in,” adds Rosen. “The market is available.”

A Cleveland native turned Louisville resident by way of Chicago, Melanie brings 20 years publishing experience to Louisville Distilled. After graduating from Indiana University Bloomington with degrees in English and Journalism, Melanie has worked as an editor on staffs at national magazines based in Chicago and Los Angeles. She moved to Louisville in 2004 where she launched a successful freelance editing and writing career. Her award-winning articles have appeared in Draft, Chef, The National Culinary Review, Pizza Today, Complete Woman, Louisville Magazine, Business First, Her Scene, Medical News and more. She lives in the East End with her husband, Sean, two children and dog. Passionate about the arts (and an adventurous foodie) Melanie loves eating her way through Louisville’s food scene and supporting the local arts and music scene.

"We love working with Victory Hemp! We utilize their hemp seed oil in our products and love that it is American grown."

"Adding roasted hemp seeds to the grain bill imparts a nutty aroma in our amber recipes and the heart seems to add a bit of body in the mouth feel."

"Our customers like the idea of added protein in what has always been seen as the ultimate morning carb load."

About Us
Our Approach
Grower Info
Team
Jobs

Victory Hemp Foods makes American grown hemp ingredients for manufacturers and brands creating great tasting, highly nutritious plant-based foods that their customers rave about. With superfood hemp from American farmers, our aim is to make every bite a Victory.

Fill out the form below and we will contact you to discuss your order.